On February 9, 2014 by Umesh Shrestha With 0 Comments - Guest's Column

-By Nishcal-
On one of the many chilly evenings spent at watering holes in Europe, I had an interesting encounter with a foreigner. I was enjoying my drink when a gentleman asked if he could join me at my table. “Yes please,” I said. He looked 30 to me.
For minutes, we didn’t exchange a word. The silence was finally broken when he asked me where I was from. After living abroad for a long time, I have started enjoying sharing stories of my country and people to foreigners. So I began by saying I was from Nepal. 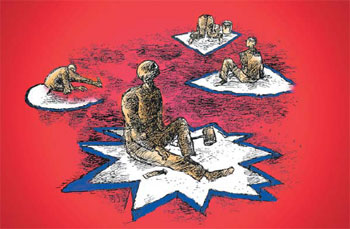 But his second question triggered a mixed feeling. “So, where is this Nepal?” he asked. I was angry and surprised that this person had no knowledge about my beloved country. “You must have at least heard something about Nepal and Nepalis,” I said. When he continued to shake his head looking dumbstruck, I thought it was my duty as a proud Nepali to enlighten this gentleman.

Nepal is the birthplace of Buddha, the land of Everest and the brave Gurkhas, I began. Till this day, we as Gurkhas continue to bleed in the fights of others. How great are we that we readily send our sons and brothers to foreign lands to fight for others’ cause, but when it comes to doing something for Nepal, we are not even ready to shed a sweat.

When Bollywood stars say they dislike Nepal, we become furious and spill all the anger on our countrymen. In early 2000 we proved our love for the country by physically assaulting our brothers from the plains in response to a Bollywood newbie’s opinion. In our show of patriotism we burned houses, looted shops and vandalised property. But when India’s Border Security Force enters our lands and does the same, we sit with our arms closed. That is how much we love our country.

We, Nepalis are capable of doing anything in the world. For money, we trade our sisters, set alight our daughter-in-laws, for social traditions, we lock them up in cow sheds during their menstrual cycle, term old-helpless women witches and attack them. We elect crooks as our leaders because we have no qualms about trading our votes for money in return.

“So, now you know how Nepalis are,” I said. His shocked face encouraged me to continue but my empty glass and wallet told me otherwise. I looked at him, said, “I am proud to be a Nepali,” and walked away.