While his contemporaries are known to either grill interviewees or bore the audience by talking endlessly, BBC Media Action’s Sajha Sawal host Narayan Shrestha made a name for himself as the smiling, polite interviewer who got the most out of his guests. Having travelled to 65 districts in the country, he reached out to Nepalis who have been regularly neglected by mainstream media and made sure their stories were heard in Kathmandu. 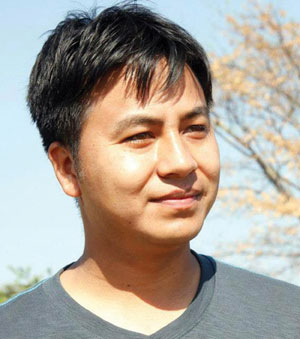 But Shrestha is now bidding farewell to his brain-child and will be recording the last episode at the end of March. “I have worked for seven years straight and sometimes I felt like things would never change. I want to take a break to study abroad and further my career,” he explains.

Shrestha was born in Ghyalchok, Gorkha where he attended a local government school. After SLC, he wanted to study science in college, but his family could not afford the fees, so he joined journalism instead. In hindsight, this proved to be a wise decision. He topped his college and won the Kantipur Journalism Prize. He then went on to work at Radio Sagarmatha and later became the host of Aankhijhyal, a TV show about sustainable development. But it was Sajha Sawal that made him a household face among Nepalis.

Says Shrestha: “Over the years, I have met all sorts of people – at the market, in the bus, while lining up for petrol – who recognised me and gave a lot of affection, feedback, and suggestions.”

From a young age, Shrestha was curious about the world around him. He wanted to understand administration, politics, development, policy-making and was keen to meet people, government officials, even prime ministers to learn more about his country. “While working for Sajha Sawal, I found out how Nepal is truly run with Pashupatinath’s blessings,” he admits. “Streams are flowing downhill, but there is no one digging canals to irrigate.”

Although Shrestha isn’t quite sure how long he will remain out of the country, he still wants to maintain a connection back home through writing. But he isn’t the only one to take a break from Sajha Sawal. Recently, editor Dhruba Hari Adhikari also left because of ‘professional differences’ and his position is still vacant. Shrestha, however, maintains that the timing of the resignations is a mere coincidence and there is no dispute on his part.